skip to main | skip to sidebar

-15 ha, I laugh at your so called cold temperatures

Its been a bit nippy of late with more snow but it didn't stop me getting out on Saturday afternoon around the lanes of St-Clet. Below a not great piece of video of one of the Snowies, a female I think, note the extensive white patches either side of the back of the neck. She was the second bird of the afternoon, the first being a very dark immature, new for the area, individual number six of the winter.

A little later on I took a different route home and chanced upon the first male of the winter. It sat imperiously atop a rather tall tree and just would not look at me, the net result being a record shot of its side, good enough to ID it again.

Very little else was at large, a few Snow Bunts again and a couple of Lapland Longpurs were all I could muster, perhaps tomorrow will be better.

I'm still using the spice jar lid but In-Focus Optics UK assure me that my digiscoping rig is on the way so perhaps the first post of the New Year will be an improvement. 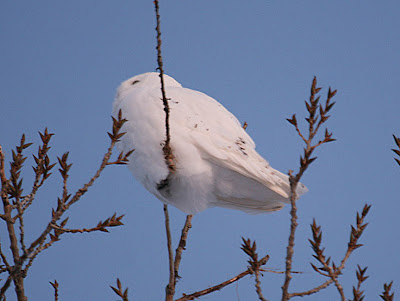 Posted by QCdays at 6:15 PM No comments:

Despite the snow, courtesy of a storm the preceeding week, and despite the cold, about -14, we still found reason to cheer with some good birding locally on December 13 2008.

Starting at dawn I, not Sandra-more sense, slid around the St-Clet area checking out the Snowy Owls. An easy one was on a barn roof just off Ste-Julie, a second sat fluffy faced on a low grain silo. Apart from a few Snow Bunts and Horned Larks that was it so it was back home in one piece for a brew.

Checking the email and news of a nearby Northern Hawk Owl was about to save a trip to Gatineau so off we went. For some reason, as soon as you cross the border into Ontario, there are more birds than our bit of Quebec. We passed several each of Rough-legged Hawk and Red-tailed Hawk idling by the roadside before reaching a minor road south of Vanleek Hill.

Our first drive took us a couple of miles along the bird's quiet road but no sign so, doubling back, we crept along, eyes on the tree tops (which, it has to be said, is my normal driving mode!). In a woody bit we flushed a couple of Pine Grosbeaks off the road which just waited until the traffic passed before resuming their gritting. As we were watching the grosbeaks a local property owner stopped and asked us whether we had seen the owl, we said not yet so he led us along the road to where the owl had appeared on an icy tree top. We soon attracted a crowd and locals passing stopped in the road to view through my scope, hopefully a small seed of interest firmly planted.

The owl's position, although good for views, was lousy for photos so we headed off to Casselman twenty or so minutes further west. We flushed loads of Snow Buntings and Horned Larks off the farm roads before seeing a Snowy Owl cruising across a field onto a pole. We then quickly found three more, two of which were absolutely bomb proof.

Heading back, we decided to do our once a year visit to the chip van in Alexandria for fries and the best onion rings anywhere, now that is a real lunch! As luck would have it we passed a fruiting bush containing three lumps of Ruffed Grouse, clumsily bouncing around and enjoying the fare.

Back at the Hawk Owl and it had changed trees so, once more into the cold for posterity, results below. 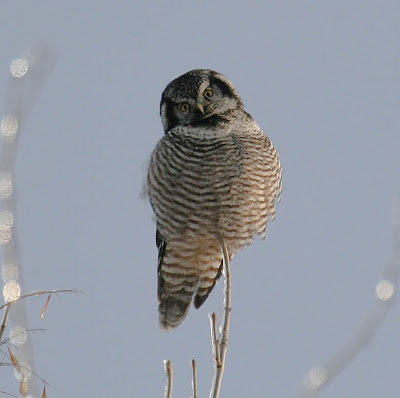 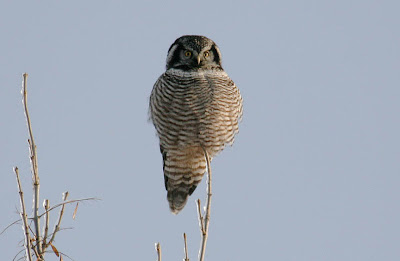 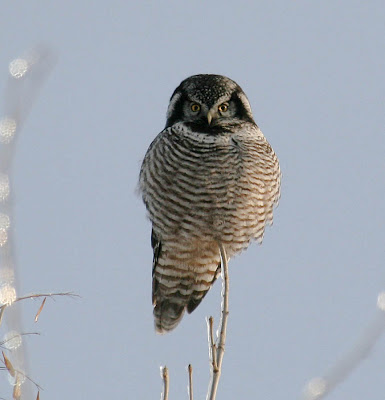 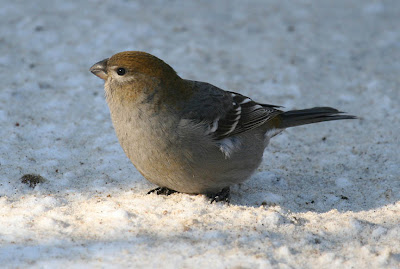 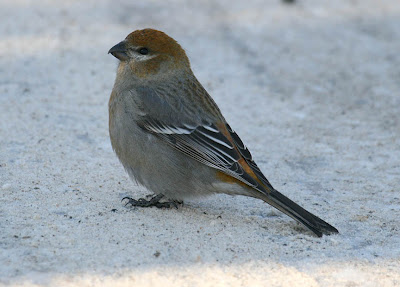 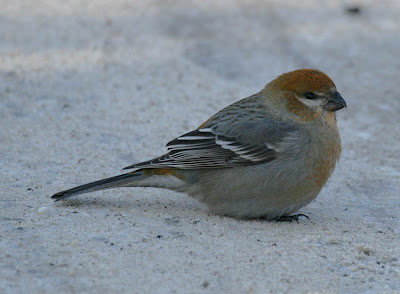 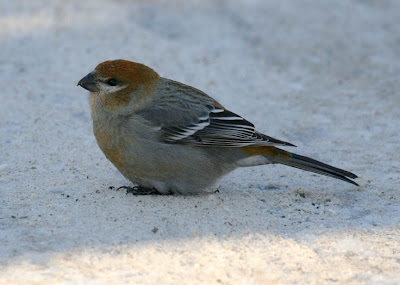 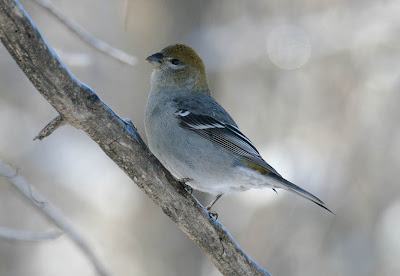 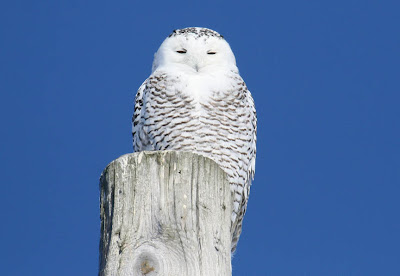 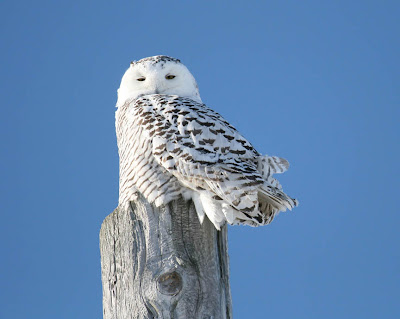 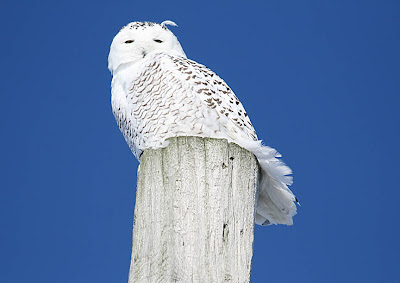 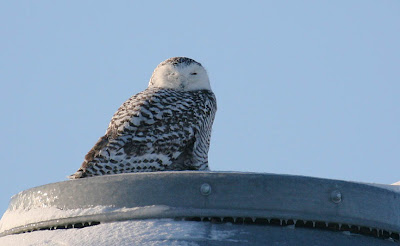 Posted by QCdays at 7:17 PM No comments:

Pine Grosbeaks without a face full of berry mush

On the way to see the Hawk Owl we passed some Pine Grosbeaks gritting on a quiet road, so, taking the opportunity to get a photo of the birds without a face full of chewed berries, I took stills and video. The second bird is less active.

This short video shows the birds busily taking up the grit and also shows what a great finch this is, even as an immature they are colourful and, being about the size of a Spaniel, they are all the more impressive. We also saw a couple of Bohemian Waxwings too, our first of the winter.

Posted by QCdays at 6:41 PM No comments:

My usual Saturday trip around St-Clet, QC, revealed two Snowy Owls, both immatures. Only one was in camera range and the first bird on the video is it. It seems to have back-combed its face!

Later, in Ontario, we visited the farmlands around Casselman, finding four Snowy Owls, two of which were tame, including this female, the second bird on the video. Unfortunately, on the second bird I had not pushed the camera far enough into the spice jar lid, a situation soon to be rectified when In-Focus Optics post me the digiscoping rig already paid for.

Posted by QCdays at 6:31 PM No comments:

This Northern Hawk Owl showed very nicely in nearby Ontario. on Saturday 13th December 2008. It even got locals excited and they all took a turn viewing through my scope, I hope none of them fancy it for their mantlepiece! More posts on the day later.

Posted by QCdays at 6:04 PM No comments:

50 posts but not quite finished

An early morning run around the lanes, as I call the St-Clet area of Quebec, revealed a new Snowy Owl, the fourth of the winter there for me so far. One of the owls was on a barn roof about 120m from the road so I did a bit of video and digiscoping even though the light was not too great, overcast, light snow. The video shows two birds, the first is the one mentioned above, the slight vibration at times, caused by a brisk wind rocking the car, makes the video a bit blurry in places but the head bobbing action is worth seeing.

The second bird was 250m+ away but I took footage anyway. I'm taking any photo or video I can so that I can produce an ID reference based on the head spotting patterns which are surely unique to each bird. You can see the snow scudding across the field of view and, again, it was breezy. Normally a few judicious squeaks, as heard on the video, is enough to gain any bird's attention but at this range it required a less than subtle whistle.

Elsewhere in Quebec, Northern Hawk Owls continue to be seen, I'm hoping one comes our way soon, otherwise I'll have to go and see one anyway. I live in hopes of one at the pits one day. 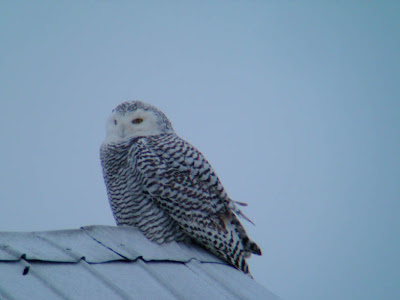 Posted by QCdays at 6:18 PM No comments:

The Snowy Owls are back

Back in Quebec after a week in England, snow on the ground, in St-Lazare at least, three Snowy Owls out around St-Clet and White-winged Crossbills feeding in the garden.

The trip back was interesting, the flight back ended in New Jersey when the Montreal leg was cancelled due to the weather. With options limited, a 24h delay or drive back, we chose the later and what fun it turned out to be. It snowed in the Adirondaks, several cars left the road, we were not one of them! We got home around 2.am, 24.5 hours after setting off from Preston, Lancashire.

Below a couple of shots and a short video of feeding crossbills. 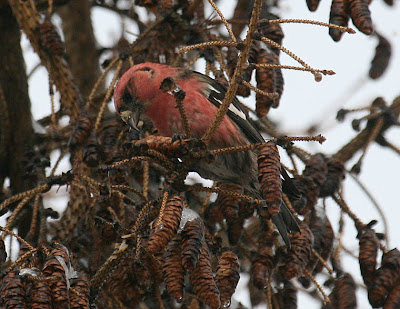 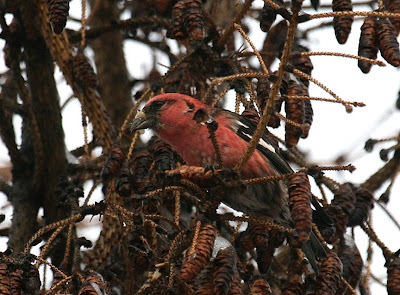 Posted by QCdays at 4:56 PM No comments:

QCdays
In 2003 my wife Sandra and I moved to Quebec. It continues to be fun. Being a Squarehead my French is lousy but actually improving. My knowledge of Quebec's birds is expanding too, enough so that I can now look at Butterflies and Dragonflies. I've been birding since TV was black and white, seen a few, found a few and still daft enough to get up at dawn in the hope finding new birds. I have no idea how to put my email up so here it is in text: DennisM@videotron.ca I also thought it was time I changed my photo, the last one made me look athletic!